In her life, at that time, it was a magic number. She was finally allowed a key to the house; her mother had to discuss how much of Mum’s pay packet she was allowed to commandeer; she had to be taken seriously now.

Mum, however, had plans of her own. She found a government job being advertised in London that offered her a decent salary and a pension. She was a quarter of an inch too short so she inhaled deeply during the measurement process and put on her most charming demeanor. She made it.

The job? Wardress at Holloway Prison, one of the largest women’s prisons in Europe at the time. About that height issue? When she inhaled deeply, Mum was a towering 5’2”.

Times were different then, Mum recounted as she watched, quite horrified, a documentary about the prison sometime during the 80s. By then the women inside were apparently guilty of murder, drug dealing, and a variety of nasty crimes. They appeared in the show as angry, disrespectful, and probably deserving of their incarceration.

In 1938/39, Mum said, the women were mostly prostitutes (yes, I know the word is no longer PC but this is Mum’s story from 1938), petty criminals, women whose “crime” was due to the desperation in many places during the 1930s. Some women were actually caught on purpose because their petty misdemeanor gave them a week with a real bunk, three meals a day and a warm shower. They’d be released after a week and be back on the streets again until desperation for the above amenities drove them to be ‘caught’ again.

The year 1939 might sound familiar. In September of that year, England declared war on Germany.

Life changed for everyone everywhere in England after that declaration. Before the declaration even, blackouts were standard operating procedure in London. Mum also explained that when the air raid sirens sounded, they, the wardresses, scurried about unlocking all the cells so the women weren’t locked in if they were, in fact, bombed. And the lights went out. When the threat passed, the lights came back on and the prisoners were all locked back into their cells.

Back to that blackout. Basically, as much man-made light as possible was blocked at night by any means possible. Road and sidewalk edges were marked with white paint to help guide anyone who was out after dark.

Mum was dependent on streetcars to get to and from her job. Their headlights had been covered, with small holes in the middle to allow some guidance but hopefully unnoticeable to the bombers that might be interested in night raids on the capital of England. When she saw those small discs of lights approaching, she would signal with her lantern that she wanted to board. Other than that, she waited in the pitch dark just up the street from that huge prison, dependent on her senses for her physical safety.

That is my verbose setting of this quite short story. I appreciate the story itself, to acknowledge the strength and bravery of all who lived during that time and subsequent similar times; to respect my mother who maintained her sense of humour despite it all; and for the insight into the calmness my mother must have shown as a prison wardress.

Late one night my mother finished her shift and made her way out to the streetcar stop. Her purse was tucked tightly under arm and her lantern was in her hand. In the dark, she felt that she was not alone. Blackout was sacred however, so Mum waited quietly. She felt the body sidle up beside her and stop. Finally, a voice hissed into her ear, “This is my corner, missus, clear off.”

“It’s all right, Lizzie,” Mum recognized the raspy voice immediately as a regular on her ward. “I’ve just finished up. I’m just waiting for the streetcar.”

“Coo, Miss, I didn’t know it was you. So sorry. No harm done. So sorry.” Mum thought there was a hint of concern in Lizzie’s voice that the encounter would work against her next time she went in again for her week of free meals and showers.

“It’s all right, Lizzie, no problem, I’ll be moving along shortly. The corner is still all yours.”


I’m sure there was a bit more to the exchange than Mum let on or that I remember. Honestly, I think my 5’2” English farm girl mother was more than a little amused that she could be taken as serious competition for an experienced sex trade worker on a dark London street.


While the job in London ticked all of Mum's boxes at the time: independence from her mother; government job; a pension, the arrival of war on Britain's shores brought another reality. Her three brothers signed up immediately to defend King and Country and Mum returned to her father's farm near Manchester to help with the haying and dairy. Farms in England during the war were vital for survival.
Thinking about my Mum now - her unwavering skill at puzzles and cryptics, nothing missed her eagle eye - I'm sure she would have landed a job at Bletchley Circle in the blink of an eye.

Mum at 21 - hard to imagine her a prison wardress. 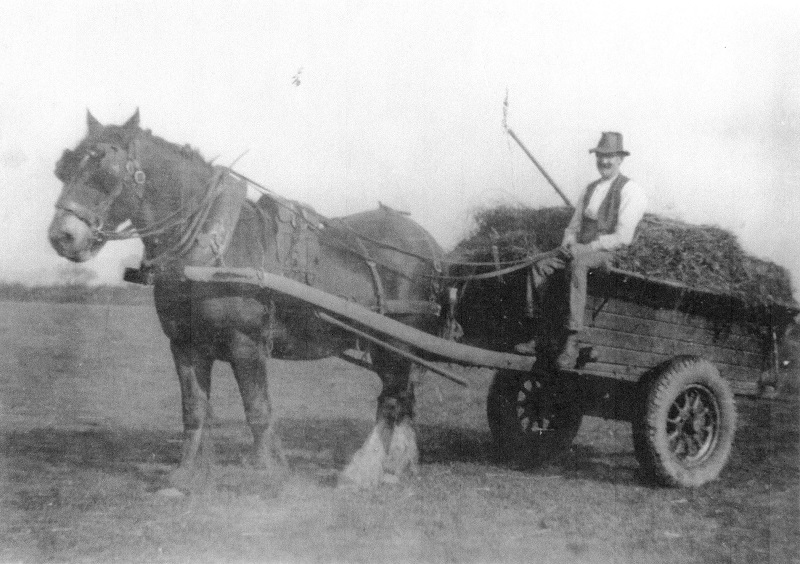 My Grampa on his farm in Denton, near Manchester.